When planning my wedding I knew I wanted a few creative touches to the ceremony but I did not want it to be too long. I didn’t want to be standing up there forever, I wanted to be married! So today I am going to share with you a few ceremony ideas and I am pulling these from my wedding, my best friends and my sisters.

-Unity Sand- I had known for awhile that I wanted to do unity sand. So I went on the hunt for a pretty unity sand vase and I wanted it to have a top because I’ve heard stories of them being knocked over. I found this beautiful unity sand vase holder with a lid! It was so pretty and I thought it would look great in our house for years to come. It came with white, black and gray sand. I was wondering what the black sand was for, well we learned to late. The black sand should have been poured in the bottom in the part you cannot see. Because we did not do that our sand only comes about halfway up. And a note: it doesn’t travel well, ours is a little mixed together but it looks pretty and it’s a great memory. We took a time in the ceremony to do the sand while the trio played music.

-Prayer Time- So this is an idea my best friend did at her wedding and I got married two months after her and she graciously allowed me to take this idea. At a point during the ceremony the pastor spoke about prayer and the importance of prayer in marriage and then invited the bridal party and the parents of the groom and bride to come up and lay hands on us (the bride and groom). There was a short silent time for everyone to pray and then the pastor said a prayer. I really loved this idea!

So these are just a few of the ceremony ideas I have been a part of and had not seen a lot. Do you have any unique ceremony ideas that you used or are planning to use? I’d love to hear any that you have! 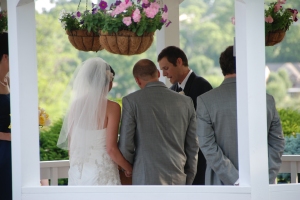 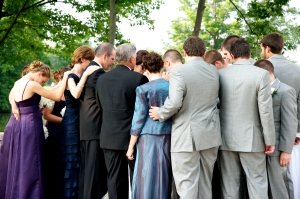 It’s Thursday again! I love Thursdays, it’s almost the weekend, my favorite show comes on tv (The Vampire Diaries) and yeah it’s a good day. But enough about that. It’s time for another installment of Wedding Reminiscing Fun Thursday!

This week i am going to blog about my table numbers. They were one of my absolute favorite ideas for my wedding. I found a similar idea on Pintrest and then made my own version.

So the table numbers were done with pictures of us at the age of the table. So table number 1 had pictures of Tyler and myself at age 1. My initial idea was to do the pictures side by side so you could see us at the same age. But that ended up being too big for the holders. So we ended up doing a picture of me on one side then Tyler on the other side. That way no matter where you sat you would see a picture of someone and not a blank side.

I bought a big pack of gray, black and white scrapbook paper with different prints and then cut out a square a bit bigger than the 4×6 picture so there was a border. I would cut out two for each table number and stick them together using scrapbook tape. That way both sides had the same border from the paper.

The next step was to find pictures at that age that were both either horizontal or vertical. We found that a bit tricky but it all depends on what pictures you have. Once we had the pictures we stuck one to each side.

For the numbers we cut circles out of white card stock and printed on them “Us at age 1” “Us at age 2” etc. You will see from the picture. We stuck those on the top corner and then viola we had the cutest table numbers! I just loved them and it was fun for everyone to see pictures of us throughout the years and look at what each of us looked like at that age.

I hope someone finds this idea fun, cute and useful! Let me know your thoughts 🙂

Pictures by Jessica at Images by Daniel Michael

So my husband and I were looking at our wedding photo slideshow last night and it got me reminiscing on planning my wedding and what fun I had with that. Of course there were many stressful moments but I had a few touches at my wedding that I just loved. So let’s call this reminiscing wedding fun Thursday shall we? I will try to post one of these each Thursday until I run out of things, and that may be fast. But we will see! So here we go with # 1.

One of my favorite things that I did and absolutely love is my guestbook. My sister got married exactly a year and 5 days before me and I had been holding onto this idea for at least three or four years since I had seen it at another wedding. So I did it for her and then for myself. I am a big fan of scrapbooking so I was able to incorporate scrapbooking with my guestbook.

The general idea is to take a scrapbook and to put on the front of each page in the center one of our engagement pictures. The rest of the page was open for everyone to sign and leave notes. I loved this idea because it allowed for everyone to leave more than just their name but to also leave notes and I preferred it that way.

At my sisters wedding we put a page at each table with pens for everyone to sign. At my wedding however the tables were already quite crowded so we put all of the sheets in the scrapbook and had a guestbook table where people could come by and sign the book.

It turned out great and I love being able to look back and see who was there and what they had to say! So that is my reminiscing wedding fun Thursday post! I hope you all enjoyed and I hope someone uses this idea and enjoys it as much as we did!

P.S. You will notice the page the photographer took a picture of is from my adorable little girls I used to nanny for who were my wonderful flower girls! A good choice because I don’t think anyone else drew pictures! 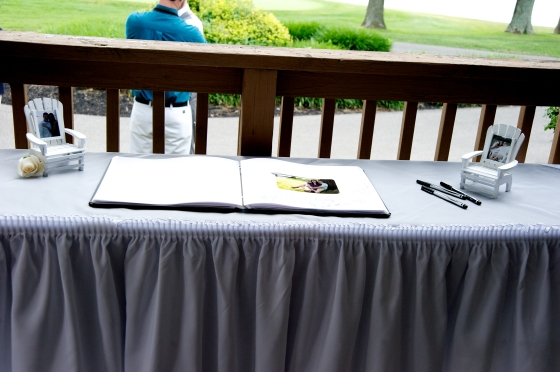 Pictures by Jessica at Images by Daniel Michael

a collection of recipes

Passionate about cooking and baking and love to share.